The 40/40M Multi IR Flame Detector is specifically designed for detection of hydrocarbon and hydrogen flames. It detects hydrocarbon-based fuel and gas fires at long distances with the highest immunity to false alarms. The 40/40M can detect a gasoline pan fire at 215 ft (65 m) or a hydrogen flame at 100 ft (30 m) in less than 5 seconds.

The 40/40M is the most durable and weather resistant range of flame detectors currently on the market. Its new features include a heated window, to eliminate condensation and icing; HART capabilities, for digital communications; lower power requirements, and a compact, lighter design.

Due to increased reliability, the 40/40 Series warranty period has been extended to 5 years and is approved to IEC 61508 Safety Integrity requirements of SIL2 (TUV). 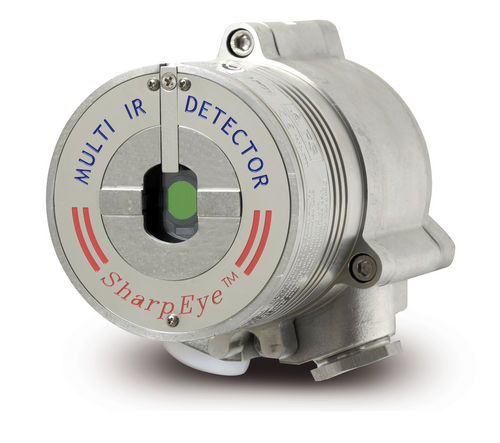 Flame detectors are optical equipment used to detect the flames of a fire, as their name suggests. Unlike smoke detectors, which sound an alarm after smoke from a fire has reached them (which can sometimes take several minutes), or sprinkler systems, which work to extinguish fires after they've grown large enough to trigger the sprinkler's mechanism (which can also take minutes), flame detectors can detect the presence of fire almost at the instant of ignition. Smoke detectors and sprinkler systems are useful in limiting the damage of caused by already-burning fires; flame detection systems can help prevent fire damage by alerting personnel of a fire before it gets out of control.

Flame detectors are important for the safety of personnel, equipment, and structures, and are highly useful for companies in hazardous process and manufacturing industries, such as oil and gas refinement. Countless flammable materials are used every day in industrial processes, such as alcohols, solvents, gasoline, propane, and wood and paper products, among many others.

Selecting the right flame detector for your application depends on several factors. The nature of the fire, the size of the area to be protected, environmental conditions, detector capabilities and limitations, and other concerns must be considered.

UV (ultraviolet) flame detectors can detect open flames, fires, and explosions within 3 to 4 milliseconds, as these sources emit UV radiation at the instant of ignition. UV flame detectors identify radiation in wavelengths between approximately 180 and 260 nanometers, and are designed to ignore sources of natural, incidental background radiation, such as sunlight. However, false alarms can sometimes be triggered by other sources, such as electrical arc welding and halogen or quartz lighting. Many UV flame detector models integrate a 2 to 3 second time delay to reduce false alarms.

IR (infrared) flame detectors monitor the heat radiation generated by fire and open flames, with a response time of roughly 3 to 5 seconds. Working within the infrared spectral band, these flame detection systems have a sensitivity range between approximately 4.3 to 4.4 micrometers. This range covers the resonance frequency of CO2, which is generated in large amounts by the burning of hydrocarbon materials, such as wood and fossil fuels. Hot CO2 gases from fires produce a peak in total radiation emission, as well as a specific spectral pattern in the infrared range, both of which are easily detectable by IR flame detectors.

Incidental, background thermal radiation and nearby hot surfaces can sometimes trigger false alarms in infrared flame detection systems. Ambient CO2 in the air filters IR radiation from sunlight and many other sources that could cause false alarms, though direct sunlight does reduce IR flame detectors' sensitivity. Special programming algorithms designed to recognize the flicker frequency of flames (from one to 20 Hz) are often implemented, thus reducing false alarms caused by heat radiation from hot machinery or other sources.

A variation of these devices, called triple IR flame detectors (or IR3 flame detectors), compare three specific infrared wavelength bands and their relative ratios. Typically, this includes one sensor which detects radiation in the 4.4 micrometer range, with the other two sensors reading reference bands above and below that level. This gives IR3 flame detection systems the ability to better distinguish between CO2-emitting flames and non-flame IR sources, providing far greater accuracy and minimizing false alarms.

IR flame detectors can detect hydrocarbon and hydrogen flames, fires fed by hydrocarbon-based fuels, gas fires, and other similar sources of flame. Many models can detect even very small fires at distances up to 215 feet or farther.

Our 3600-I Triple IR (IR3) flame detectors can detect fuel and gas fires at long distances, and feature the highest immunity from false alarms.

The 3600-M Multi IR flame detector is specifically designed for the detection of hydrocarbon and hydrogen flames. It can detect hydrocarbon-based fuel and gas fires at long distances, and offers the highest immunity to false alarms.

UV & IR flame detectors (or UV/IR flame detectors) compare threshold signals from the ultraviolet and infrared spectrums. Signals from both sensors are analyzed for intensity, frequency, and duration; this helps these systems better recognize different types of flame signatures and leads to fewer false alarms. Simultaneous detection of radiant energy in both sensors will trigger the system's alarm. Response times can be as fast as 150 milliseconds; through the three second range is more typical.

Different models of UV & IR flame detectors put varying emphasis on one technology over the other. Most UV/IR flame detection systems operate on infrared wavelengths between 2.5 and 4.5 micrometers, and can detect radiant energy in the short wave range of both the ultraviolet and infrared spectrums. These flame detectors can detect hydrocarbon-based fuel and gas fires, hydrogen and hydroxyl fires, hydrocarbon fires, metal fires, and inorganic fires; however, this range varies from model to model.

Our 3200 Series semiconductor wet bench flame detectors are designed to withstand the harsh conditions that can be found in semiconductor manufacturing wet bench applications.

The 3300 Series UV/IR flame detector is designed for indoor applications in non-hazardous areas such as warehouses, exhibition halls, and office spaces. The Model 3300 is ideal for use in areas where short line of sight is a factor.

Our 3600 Series UV/IR flame detectors are available in two versions: The 3600L and 3600LB detect hydrocarbon-based fuel and gas fires, hydroxyl and hydrogen fires, and metal and inorganic fires. The 3600L4 and 3600L4B models are essentially identical, but have IR sensors that work at a wavelength of 4.5 micrometers; they are only suitable for hydrocarbon-based fires.

Sierra Monitor is also a distributor, in the US and other regions, of Spectrex Sharpeye 40/40 Series flame detectors, offering users a wide range of UV/IR and Triple IR flame detectors with FM approval.

If your manufacturing plant, warehouse, or other facility needs a top-of-the-line flame detection system, Sierra Monitor is your number one source. Contact us today to learn more.

The 3600R is the most durable and weather resistant single IR flame detectors currently on the market. Its features include a heated window, to eliminate condensation and icing; HART capabilities, for digital communications; lower power requirements; and a compact design.

Model 3600-U (& UB) detects hydrocarbon-based fuel and gas fires, invisible hydrogen flames, and fires from hydrides, ammonia, silane and other organics. The 3600-U-UB is the most durable and weather resistant UV flame detector currently on the market. Its new features include a heated window to eliminate condensation and icing; HART capabilities, for digital communications; lower power requirements; and a compact, lighter design.

Note: This type of detector should not be exposed to UV radiation sources such as welding, sparks, and electric arcs as it will cause false alarms.